Built with Indexhibit. This website is under permanent progressive construction, if you want to help drop us a line at saabv4[at]saabv4[dot]com. 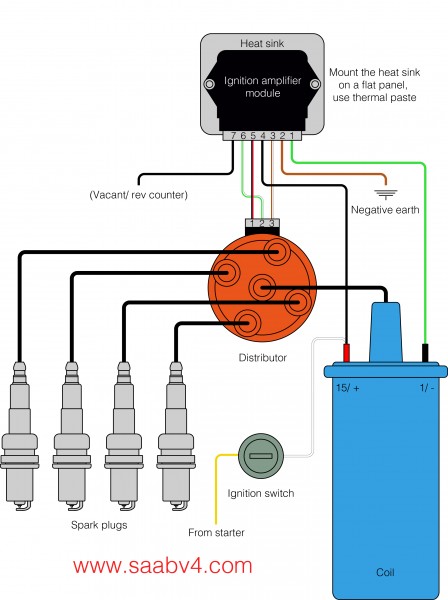 In search of more reliable motoring, many replace the original breaker points ignition system on their V4 with an electronic ignition kit from e.g. Pertronix or Aldon. Although this is a reasonably satisfactory solution, it comes with some disadvantages over a more sophisticated system as factory fitted to many cars from the early 1980s. The biggest drawback of the Pertronix system is that it can burn out if you connect the wires the wrong way around at first attempt, or leave the ignition on without the engine running. In the Volkswagen scene it’s common to replace points ignition with a Hall effect system from a MKII VW Golf, Scirocco, Jetta, Passat or Audi 80/ 100 (VAG group). This system won’t burn out because the ignition amplifier module automatically switches off the current if the engine doesn’t run. This conversion can also be done to most V4 distributors (except the very early ones), as they are part of the same family of Bosch J(FU)4 type distributors as used on VWs. Download the full article to find out how to convert your distributor.